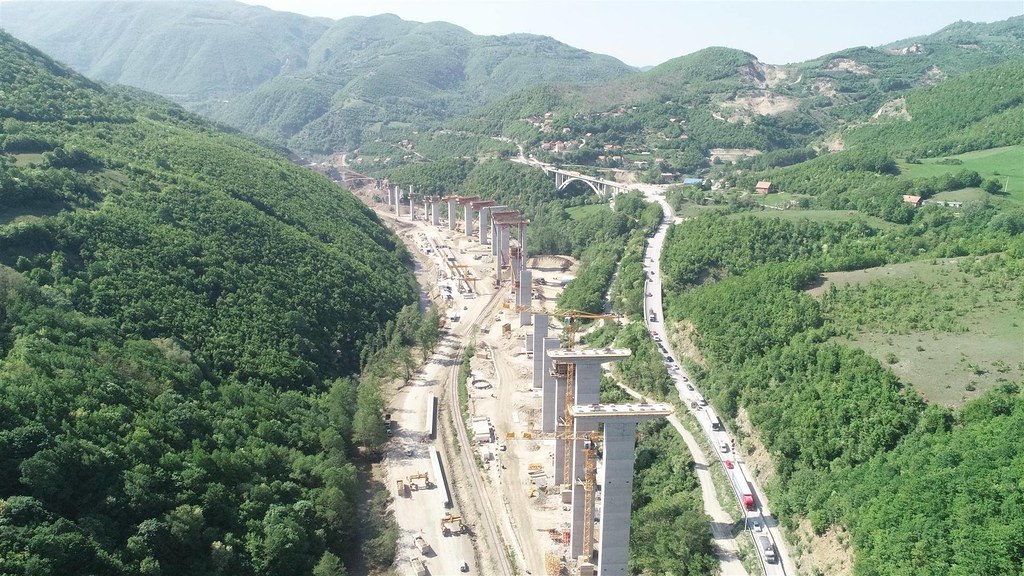 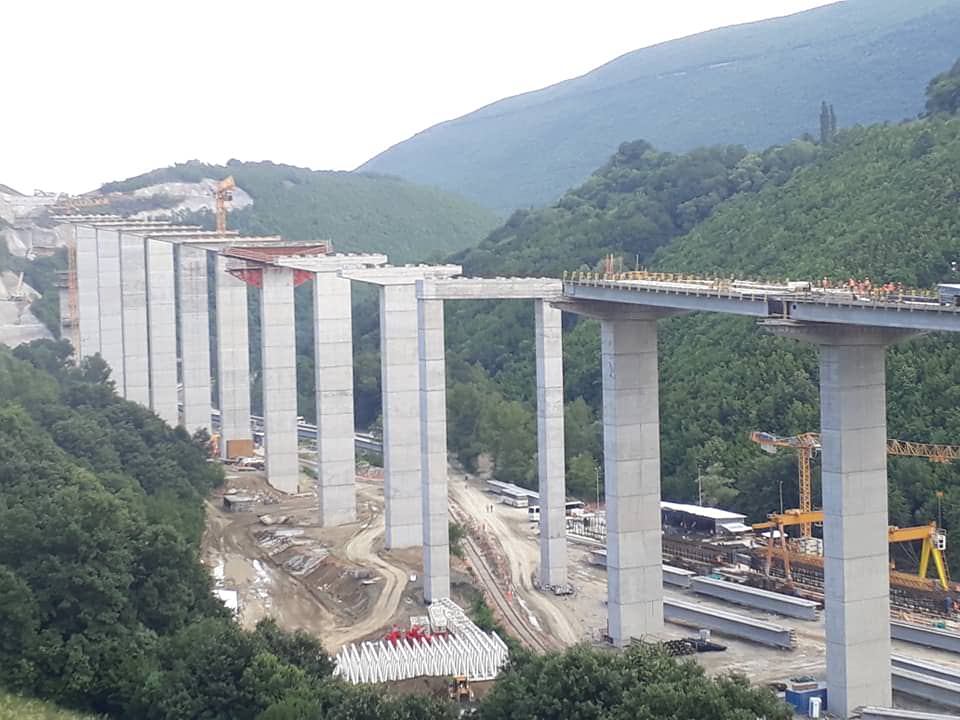 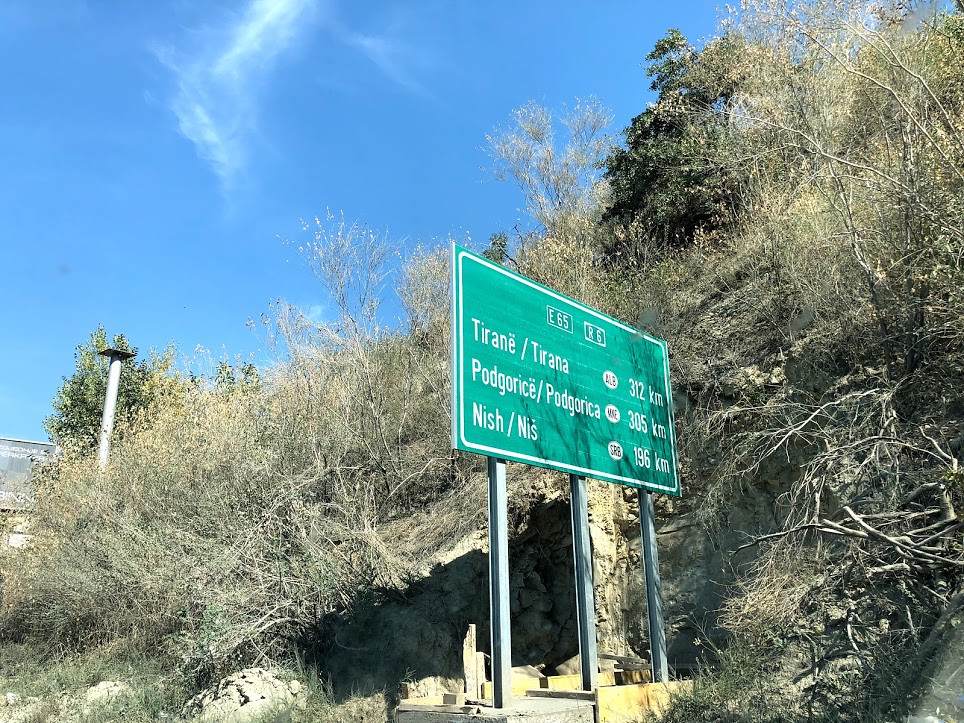 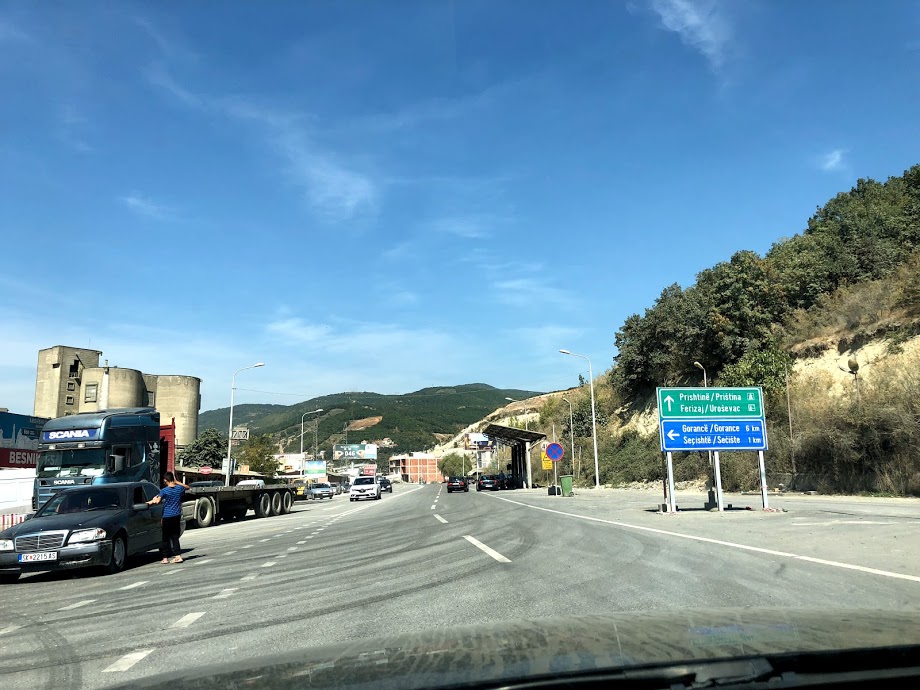 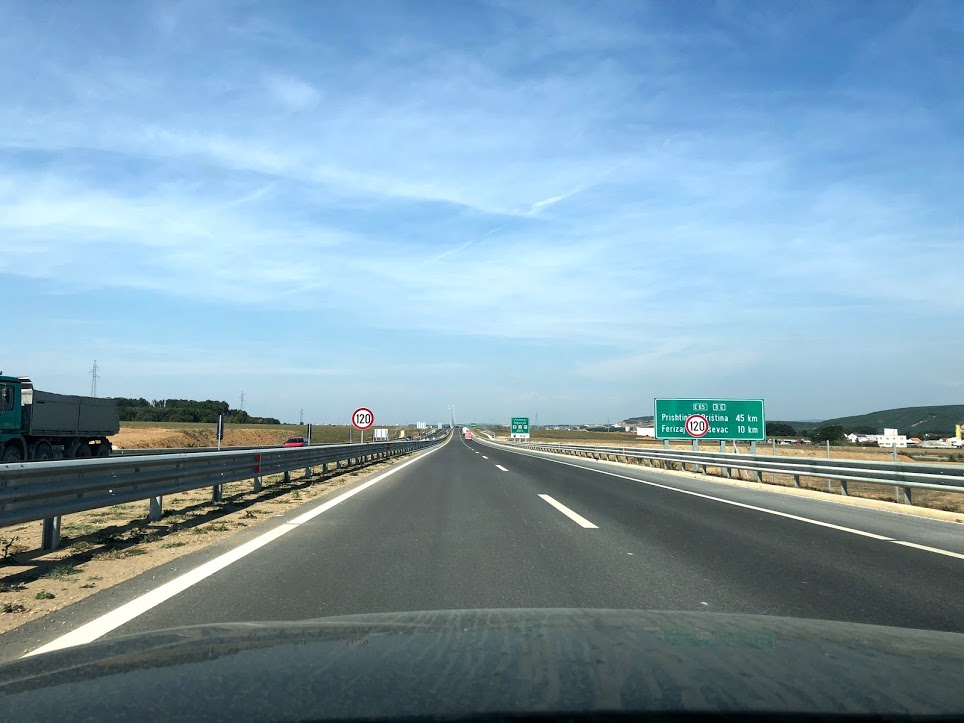 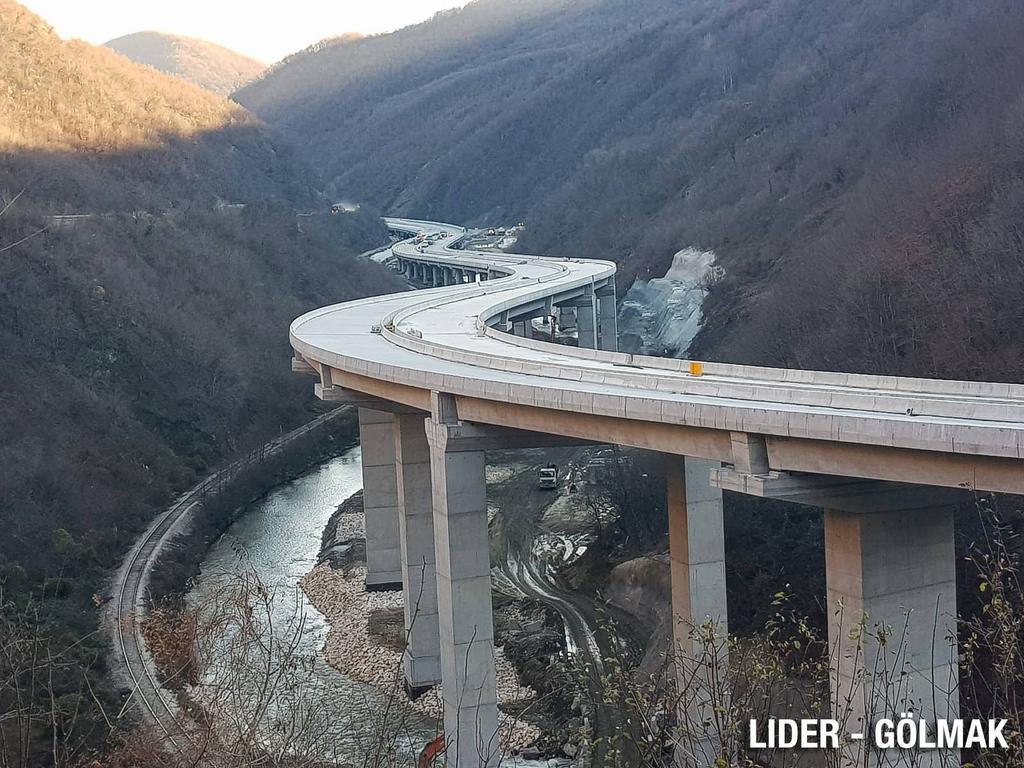 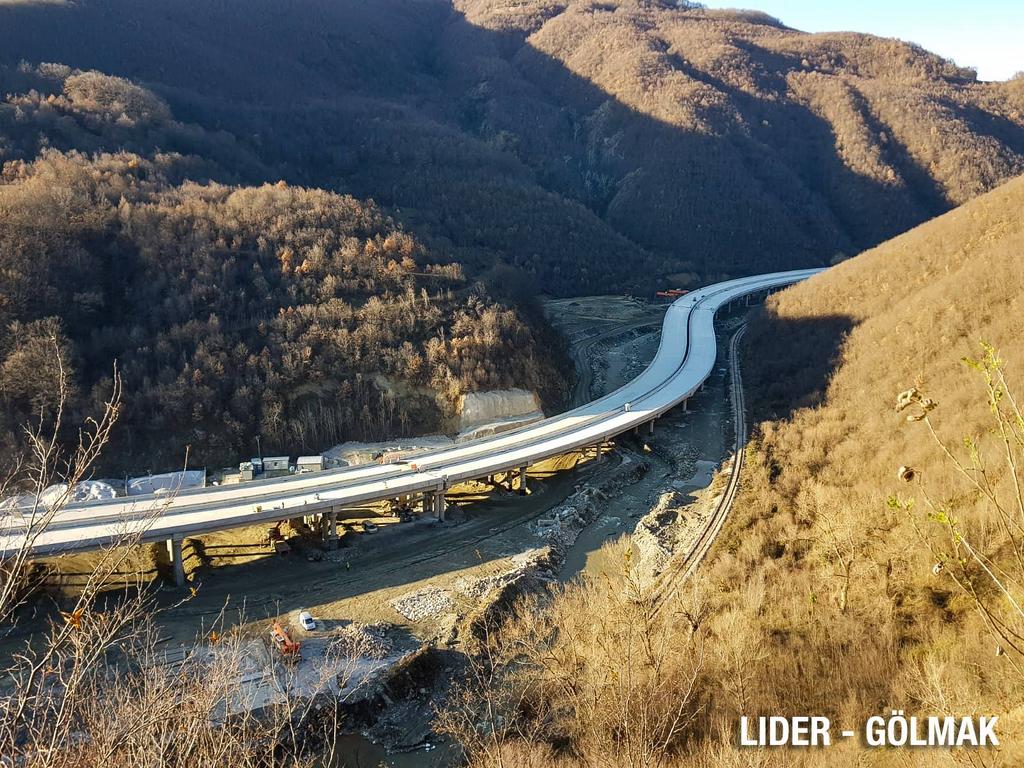 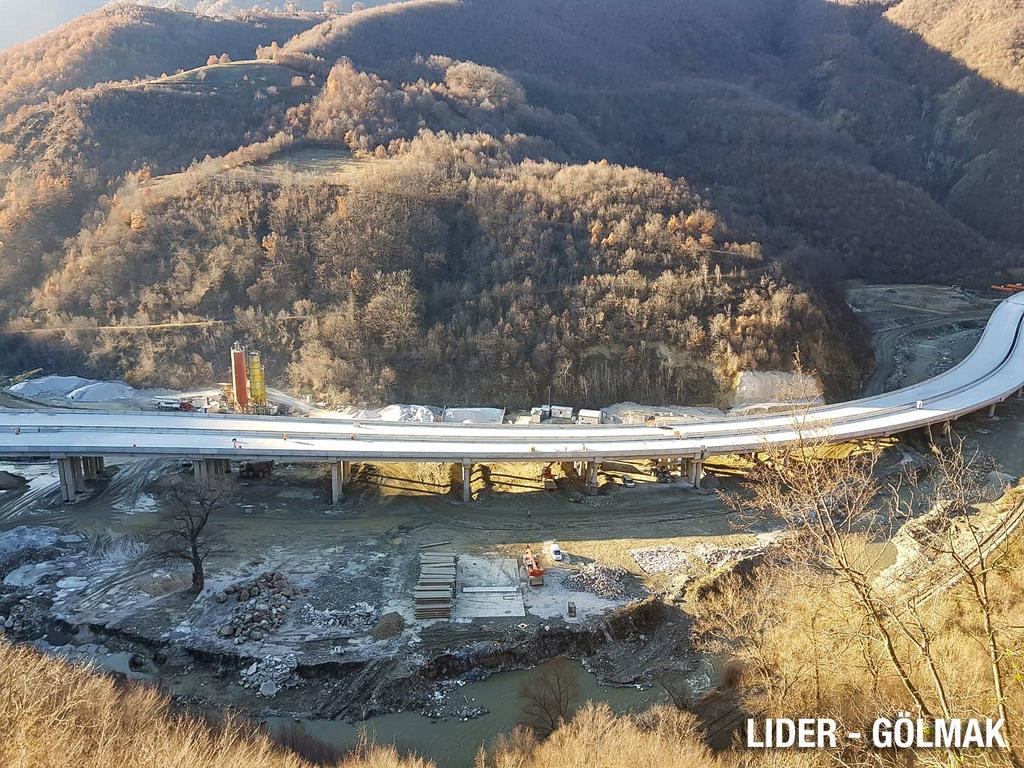 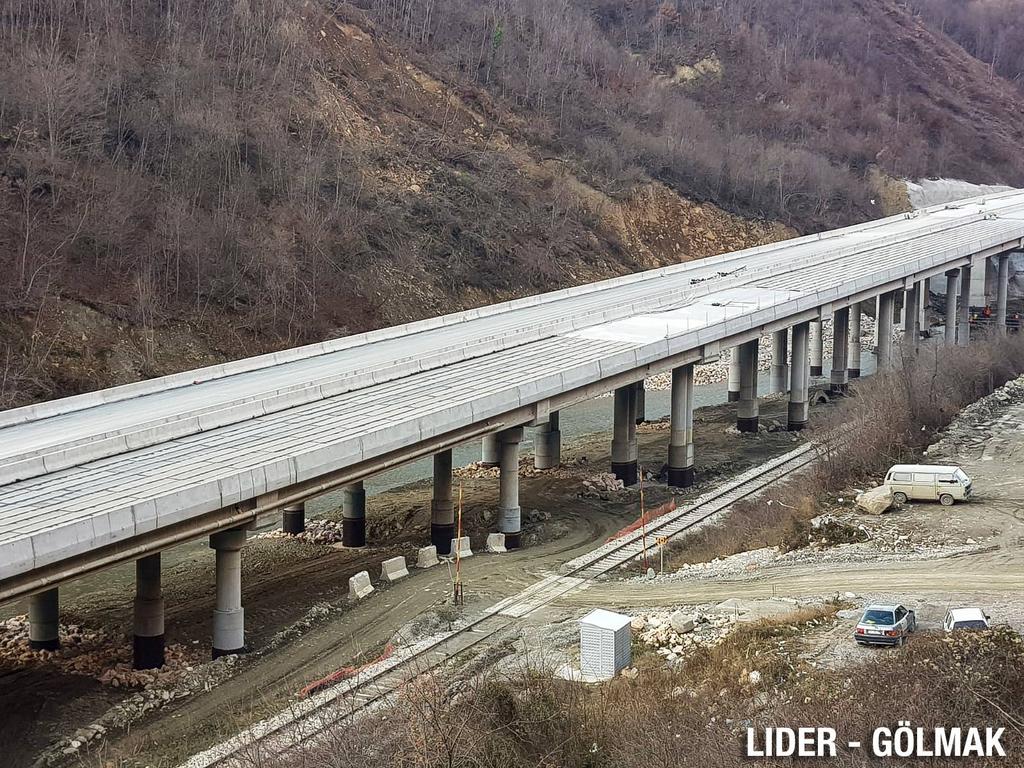 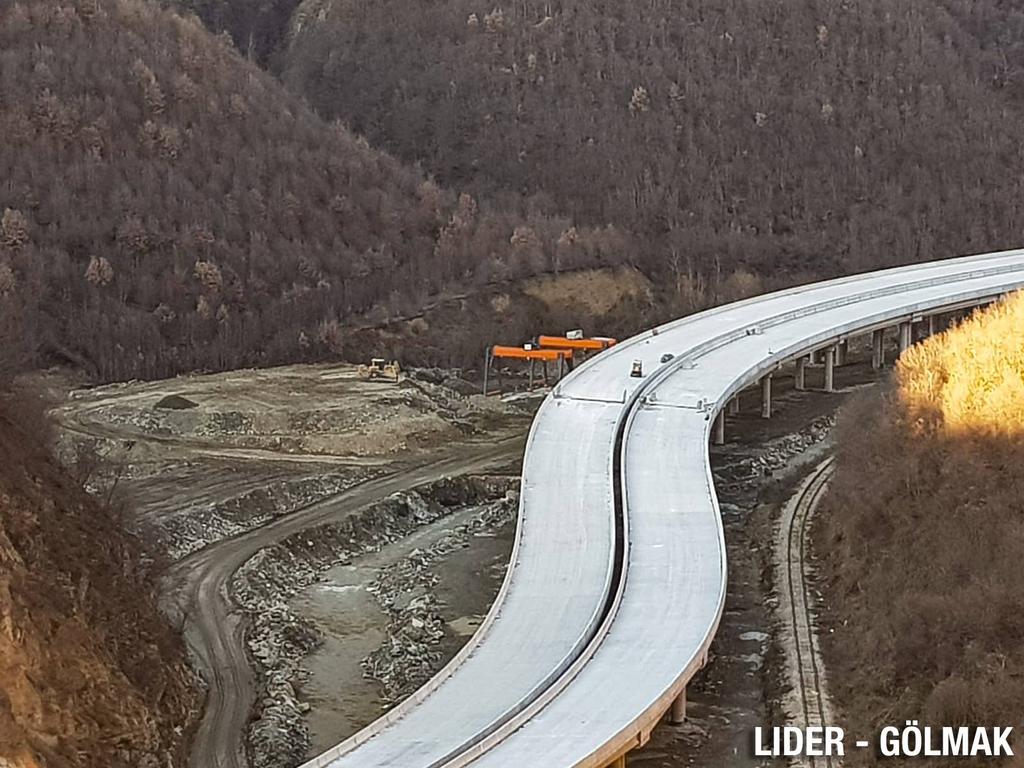 Hi, I've joined Wegenforum in the interest of Dutch-speaking road-geeks community. I don't feel comfortable in my Dutch so I hope I won't be a bother with my English

. You can ask me anything Kosovo, Albania, some Macedonia and Serbia.

About R6, and the viaduct: it's being built by Bechtel Enka, a USA and Turkey consortium and not the Chinese. The Chinese are not involved in any project in Kosovo at the moment, nor in Albania (although they have tried) or Macedonia (as far as I know). I'm partly glad we have managed to avoid them. To be fair, it's not that they have shown particular interest, they know their friends. We've built the motorways without any loan until now. A bit off-topic...
Omhoog 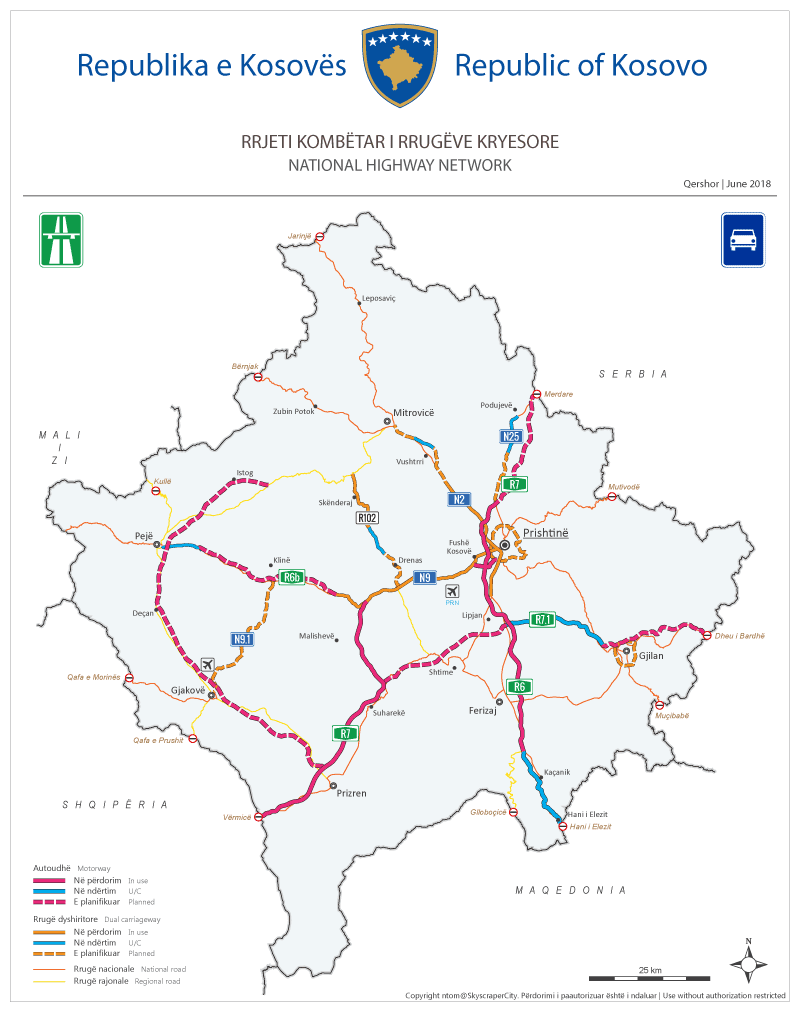 1) Could you maybe show some fresh (recent) pictures of the road infra ?
2) Are there open transit route(-s) (given example: Albania -> Kosovo -> North-Macedonia) ?
Omhoog

Only transit to/from Serbia is problematic. If you want to, you can travel between Montenegro, Albania and North Macedonia via Kosovo. If you're by car, you need to arrange car insurance at the Kosovo border since the European Green Card is not valid in Kosovo.

If you travel from Serbia via Kosovo to one of these countries (let's say Nis-Pristina-Tirana), you haven't left Serbia via an official border crossing. This shouldn't be a big problem if you enter Serbia again, although Serbian border guards might cancel any Kosovo stamps in your passport. But if you travel from one of these countries via Kosovo to Serbia (say Skopje-Pristina-Nis) you haven't entered the country in a legal way. Especially the latter is something which can cause problems once you try to leave the country.

I'm planning to go to Kosovo, Montenegro and Albania later this year.

Jeff, what Coen Tunnel said is correct, you can transit to/from any of the neighbouring countries, with the exception of Serbia, they will turn you away if you haven't entered previously from another Serbian border. Their loss, I guess.

The governments of Albania and Kosovo have agreed to remove border checks altogether come this April and if works go as planned you will see no borders anymore. Macedonia is very receptive to the idea as well.

BTW, you can now purchase your insurance beforehand online at bks-ks.org and you have the prices there too.

And I will try to post recent pics.
Omhoog 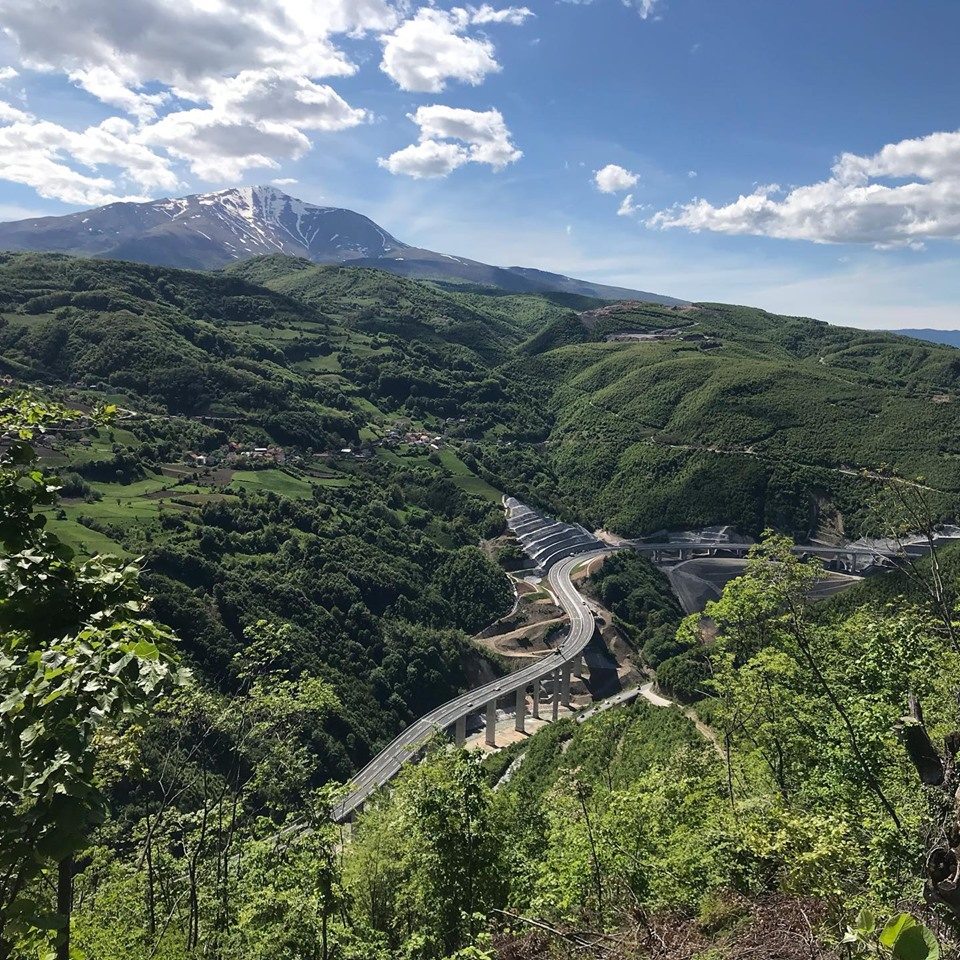 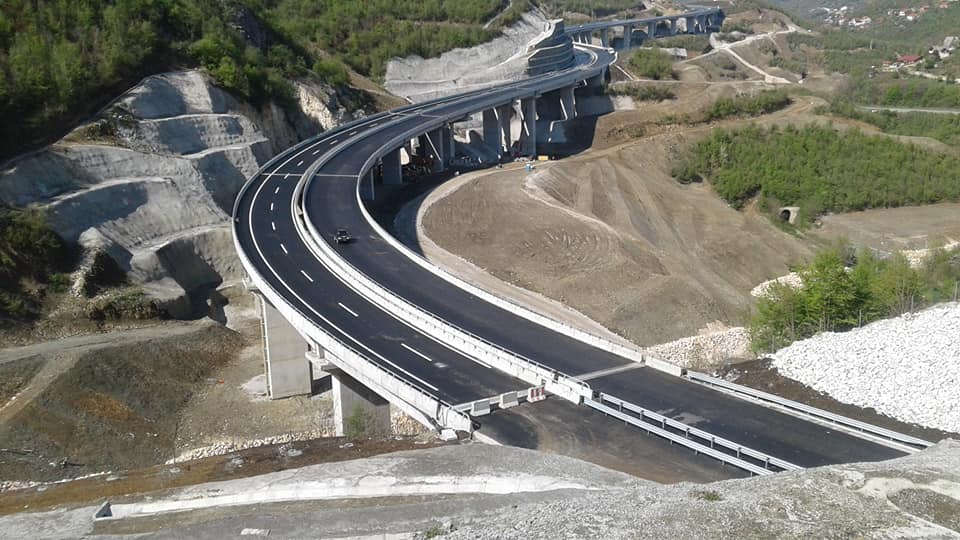 The section from Kaçanik to Hani i Elezit is impressive indeed. The scenery is amazing. Only a couple of days left before we can witness it firsthand.

I want to take the opportunity to explain that, contrary to what many believe, no major road has been funded by the EU. A rundown of some of the major projects from this decade:


Only two smaller projects are being financed by European banks:


This being said, please enjoy these two bad quality videos showing the Kaçanik Viaduct. Hopefully, we can have some better quality ones in the coming days.
Link
Link
Omhoog

ntom schreef: ↑zo 12 mei 2019, 19:51 The section from Kaçanik to Hani i Elezit is impressive indeed. The scenery is amazing. Only a couple of days left before we can witness it firsthand.

ntom schreef: ↑zo 12 mei 2019, 19:51 The section from Kaçanik to Hani i Elezit is impressive indeed. The scenery is amazing. Only a couple of days left before we can witness it firsthand.

You are most welcome, it opens on the 29th of May.

I was merely illustrating the fact that we have built our roads with our own funds. In total north of 2 billion euros in this decade alone. I was not complaining that the EU has not given a hand, like it has done with others in this area, because a lot has to do with incompetent administrations in Kosovo. In actuality, in recent years, there has been an increased interest (partly because of Berlin Process) and WBIF has granted a couple of millions for the studies of R7 to Merdare and R6b to Pejë. And in addition, it has granted a sizable grant for the modernization of the main north-south train line.

And, sure, external grants have helped but that is only a part of the story. The fact is that, because the government has had the road network as a priority, as a means to speed-up economic growth, the rest of the sectors have suffered dearly. Take Health Care for example, where the budget is 1/10 of that of the Infrastructure (300 million EUR) today, and only a third of that are on capital expenditures. It's not sustainable.

All in all, we will have a decent road network by the turn of the decade but it has to give way to better-targeted spending in the coming decade imo. This will be a problem if the current caste of politicians continue to be in power because targeted spending and better services don't really bring more votes from their electorate. Eh, all hope has not been lost, yet.

Anyway, sorry for a bit of OT, if it bothers someone.
Omhoog

This was exactly the information I was looking for, and it was the answer I expected to see.

Perhaps the government does a good job focussing on infrastructure first to speed up economic growth, but doing so in spite of everything else is a bit ... much, maybe.
Omhoog

I'm already looking forward to my holiday in September. As I don't want to drive directly from Serbia into Kosovo (because I want to travel further to Albania that would mean an unofficial exit from Serbia) I have planned to travel from Belgrade to Skopje, and from there to Pristina. So I'll drive the complete stretch of the R6 from the Macedonian border to Pristina. 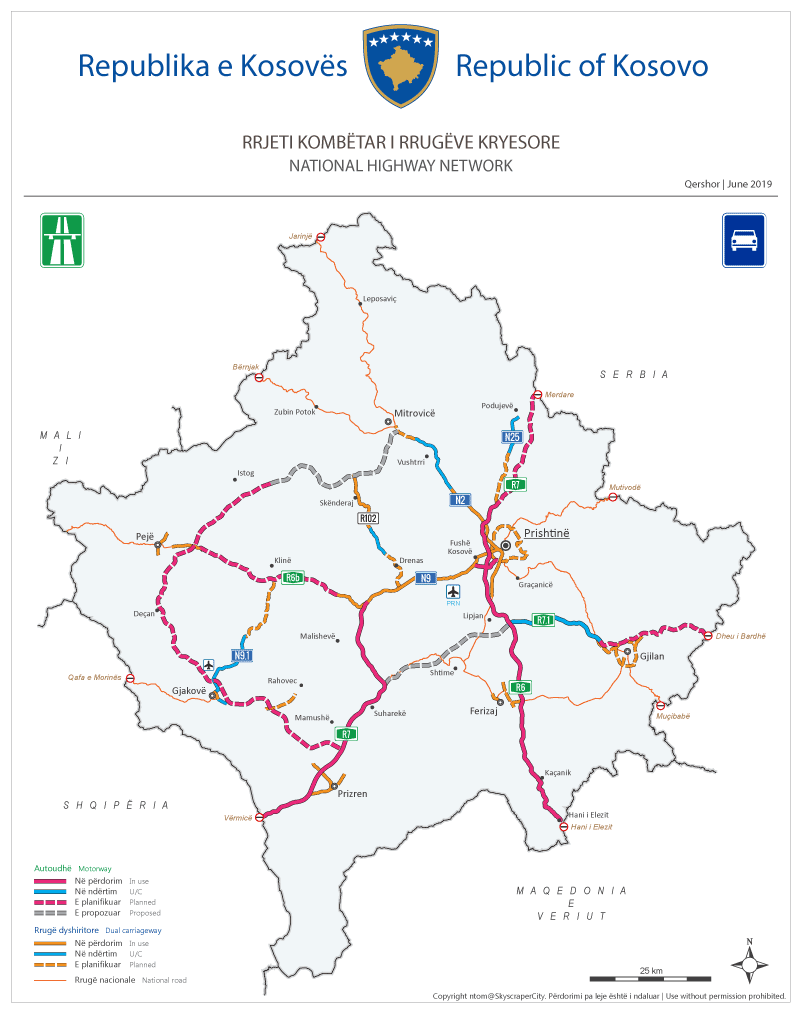 List of motorway and dual carriageway segments as of June 2019: 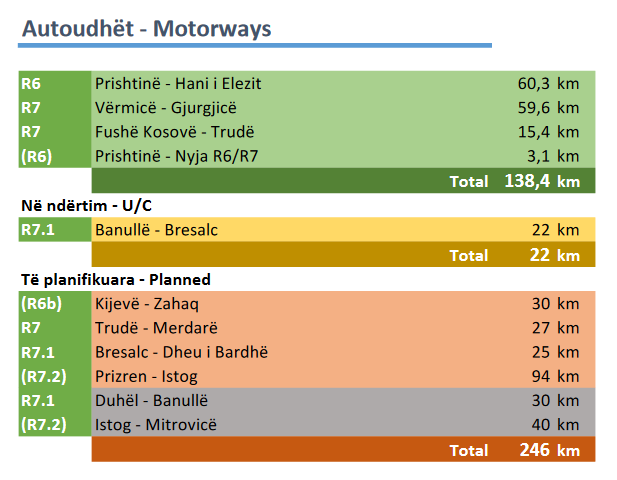 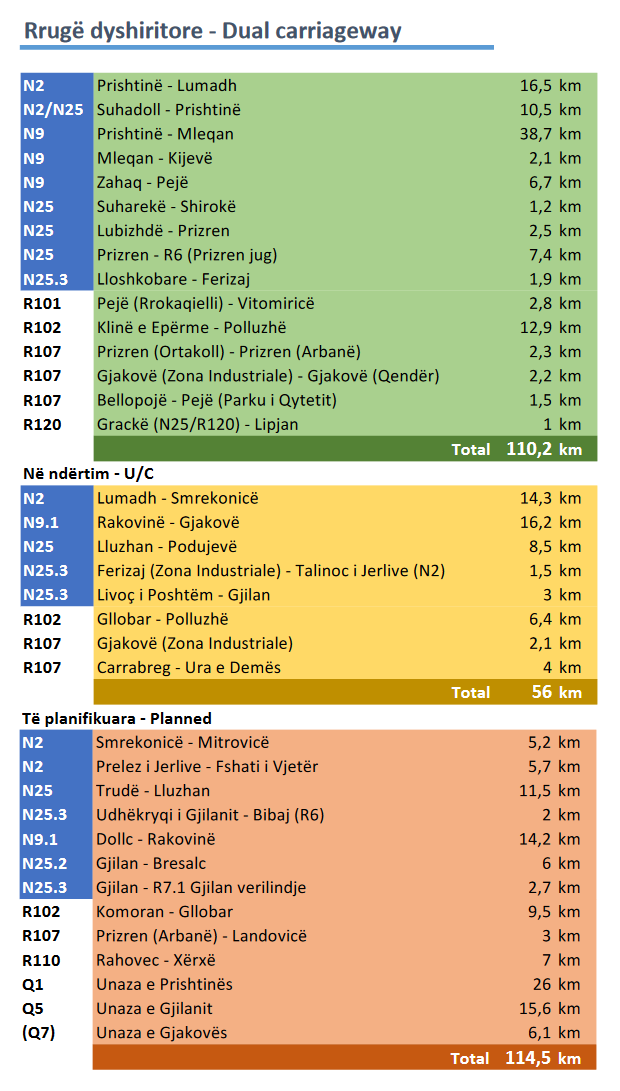 What about the R108, the (new) road from Dečani to Plav (MNE)?
"You know the greatest danger facing us is ourselves, an irrational fear of the unknown. But there’s no such thing as the unknown — only things temporarily hidden, temporarily not understood.” - James T. Kirk

To avoid confusion: R108 is a single carriageway road, with two lanes. The first segment of 14.51 km should be ready by next year, while procurement for the remaining 12.58 km is almost over and construction should begin soon.

It will be a nice mountainous road but it will climb quite high at 2184 m. This will make it the highest paved road. I'm not sure if it'll stay open throughout the year though.

We're spending quite less than initially planned on this road, around 8 million euro as opposed to 50 million. I don't have a project in my hand but I'm certain that that involved a tunnel on both sides of the border to bring the quote to a more manageable level of around 1650 m and quite an improved alignment. It was supposed to be the superior alternative to both the R106 and N9 roads to Montenegro, but alas, with the current project I'm not sure it will.
Omhoog
378 berichten