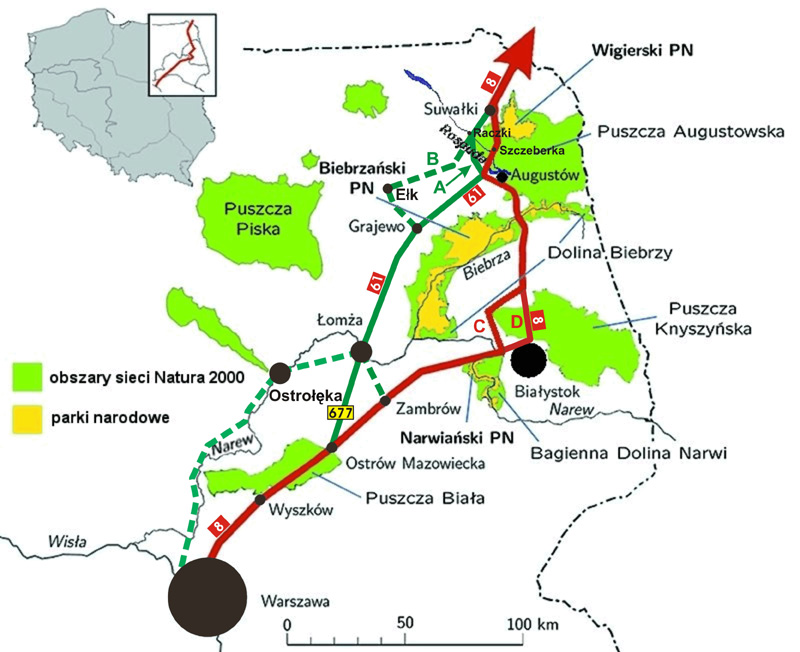 Via Baltica is planned to connect Helsinki with Warsaw. Polish government promotes the route via the city of Bialystok through the most valuable areas proposed for Natura 2000 sites and protected under Polish law as well as international conventions in Podlasie region of Poland:

Help for signing the petition: 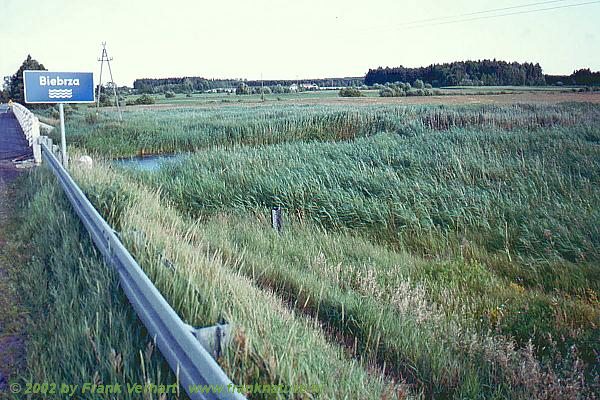 [PL] Via Baltica: Road to ruin for Polish wildlife

Road to ruin for Polish wildlife

© N. Selva. Elks are on the way of proposed Via Baltica expressway

More than 150,000 people in Poland have already signed a petition against the road construction, but now campaigners are calling for more people to express their concern through an e-petition.

OTOP, the Polish partner of BirdLife International, WWF Poland and the CEE Bankwatch Network are asking the Polish government to stop work immediately on four projects and await the results of a Strategic Environmental Assessment. â€œWe understand the need for upgrading the road system, but we object to these decisions being taken without proper environmental evaluation. There are some very precious areas at risk, and a full appraisal should identify a less damaging route for Via Baltica,â€ said Malgorzata Znaniecka, OTOPâ€™s Important Bird Area (IBA) Officer.

The current road development proposals cut through Augustow and Knyszyn Primeval Forests, the Biebrza Marshes National Park and skirt Narew River National Park. All four are recognised as IBAs by BirdLife and are Special Protected Areas (SPA) under the Birds Directive and proposed as Sites of Community Interest (SCI) under the Habitats Directiveâ€”Europeâ€™s strongest laws for the protection of natural environments.

The sites host a magnificent array of threatened wildlife, including wolf, lynx and Lesser-spotted and White-tailed Eagles Aquila pomarina and Haliaeetus albicilla. Biebrza Marshes is the most important breeding site in Europe for two globally-threatened bird species; Aquatic Warbler Acrocephalus paludicola and Greater Spotted Eagle Aquila clanga. â€œDeveloping roadways through the centre of this pristine environment is nothing short of a crime,â€ said Anna Roggenbuck, Polish National Coordinator of CEE Bankwatch Network.

â€œThe Polish government has said it intends to begin work on the Augustow city bypass by the end of 2006, which will begin with the logging of primeval forest for access roads. Construction sites will cause habitat loss and fragmentation, as well as the obvious impacts of noise, water and air pollution, and the heightened risk of future road collisions with animals. If the Strategic Environmental Assessment results are soon going to show the best alternative route, why not wait?â€

The web petition is posted at: http://www.viabalticainfo.org/en/petition and the signatures will be presented to the Polish government on 16 November 2006.

17.07.2006 In a move which environmentalists believe violates both national and European Union environmental legislation, Polandâ€™s Minister of the Environment Jan Szyszko announced the routing of the EUR 72 million Augustow city bypass, a part of the S-8 expressway in north-east Poland, through the wetlands of Rospuda Valley.

Rospuda Valley in the Augustow Primeval Forest is a priceless part of the European Natura 2000 Network, and serves as a refuge for a number of extremely rare species of animals, some on the brink of extinction, and plants as well habitats. International environmental organisations OTOP - Polish Society for the Protection of Birds (the Polish partner of Birdlife International), CEE Bankwatch Network and WWF reacted with dismay to the ministerâ€™s decision, asserting also that the new route will in no way provide a solution for transit lorries drivng through the centre of Augustow Spa.

Robert Cyglicki, of CEE Bankwatch Network which monitors the provision of public EU money across central and eastern Europe, said: "Politics has got the better of common sense in this decision. The Minister of Environment has caved into pressure from the roadmen and politicians who are looking forward to the forthcoming local elections. The environmental and financial analysis for this bypass explicitly showed that just a minor correction of the Augustow bypass route would avoid impacting Rospuda Valley. The optimal variant has been completely ignored by the ministry."

The Augustow bypass lies within the so-called "Bialystok option" of the First Trans-European Transport Corridor "Via Baltica". The corridor can potentially be co-financed by the European Union. However, the route of the bypass now contravenes EU environmental legislation. The European Commission is currently investigating this case under its infringement procedure. Polish campaigners maintain that the Polish authorities cannot rely on EU financial support for the Augustow bypass while at the same time violating EU directives on the protection of nature valuable sites.

Majka Wisniewska, of WWF Poland, said: "We have worked hard to show that the interests of people and nature, including lorries drivers and local communities, are reconcilable. We elaborated and analysed an alternative route for the Augustow bypass, we initiated a Strategic Environmental Assessment of the First Trans-European Transport Corridor and finally commissioned an analysis of traffic safety in the Podlasie Region with specific proposals on how to improve the safety of road users. Now we can only appeal to the law courts."

The organisations also have serious concerns that this controversial decision from the Ministry of Environment will not guarantee the rapid construction of the desperately needed Augustow bypass due to a shortage of national budget funds and a mountain of legal problems.

Malgorzata Znaniecka, of OTOP, said: "Without European financial support this investment could drag on for ages, causing irreversible damage to people and unique habitats. Moreover, financial fines from the European Commission for non-compliance with European environmental principles are also feasible. It is unbelievable that by ignoring the routing correction in favour of people and the environment, with this decision the Minister has effectively ruled out the chance for EU support and the speedy construction of the bypass."


Controversial routing of Via Baltica

CEE Bankwatch Network, along with WWF Poland and the Polish Society for Protection of Birds (Birdlife Poland), is concerned by the possible negative environmental impact of the development of expressways in north-east Poland, in violation of both Polish and EU legislation. The most controversial and harmful for nature is the S-8 expressway, which is already under construction as part of the â€œVia Balticaâ€ corridor.

Via Baltica is the name of the pan-European transport corridor from Helsinki to Warsaw, and the expressway is a priority for realising the vision of a seamless transportation network stretching across Europe from Portugal to Finland via Poland â€“ the so-called Trans-European Network for Transportation.

A potential parking place mapped out already in the Rospuda Valley. Photo: A. Bohdan

The current road number 8 is being gradually upgraded to a higher standard and will eventually become an expressway. The trouble is that there are well advanced plans for the construction of new sections of the S8 expressway that will increase traffic flows and cause unnecessary and irreversible damage to five extremely valuable sites for the conservation of birds, other animals, plants and habitats â€“ indeed these are Special Protection Areas which may become Special Areas of Conservation as part of the EUâ€™s Natura 2000 network.

The project promoter, the Polish General Directorate for Public Roads and Motorways, has already received financial support from the World Bank for upgrade works on the S8 road section through the primeval Augustowska Forest. Other construction works may be financed by a state programme established with the aid of World Bank and European Investment Bank framework loans for rehabilitation and roads maintenance.

NGOs have commissioned plans for an alternative routing of a particularly acute section of road number 8, which would have far less environmental impact and would cost less money. Such a solution is currently being ignored, although the General Directorate for Public Roads and Motorways â€“ after several months of NGO campaigning â€“ has agreed to carry out a Strategic Environmental Assessment (SEA) as a basis for the final decision about the routing of Via Baltica. The results of the SEA are expected in November 2006.
Omhoog 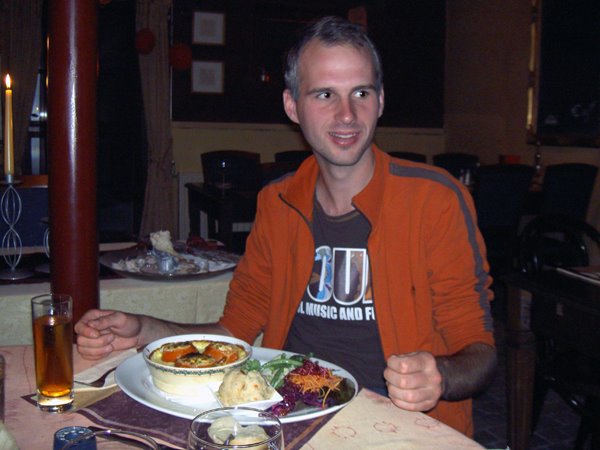