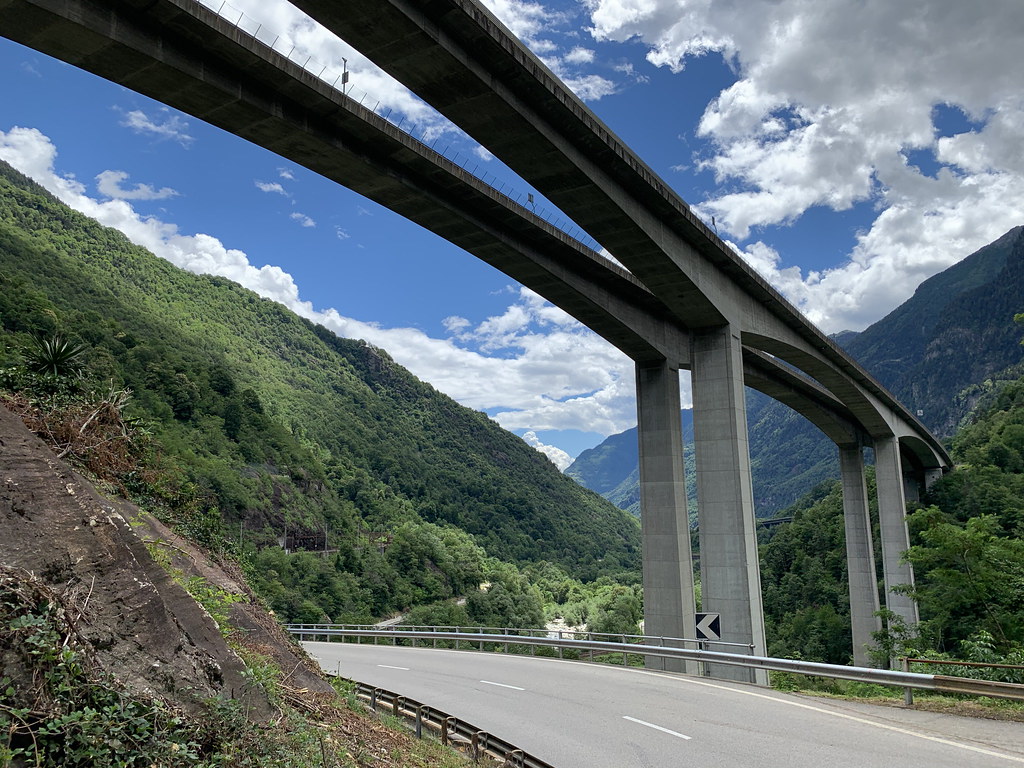 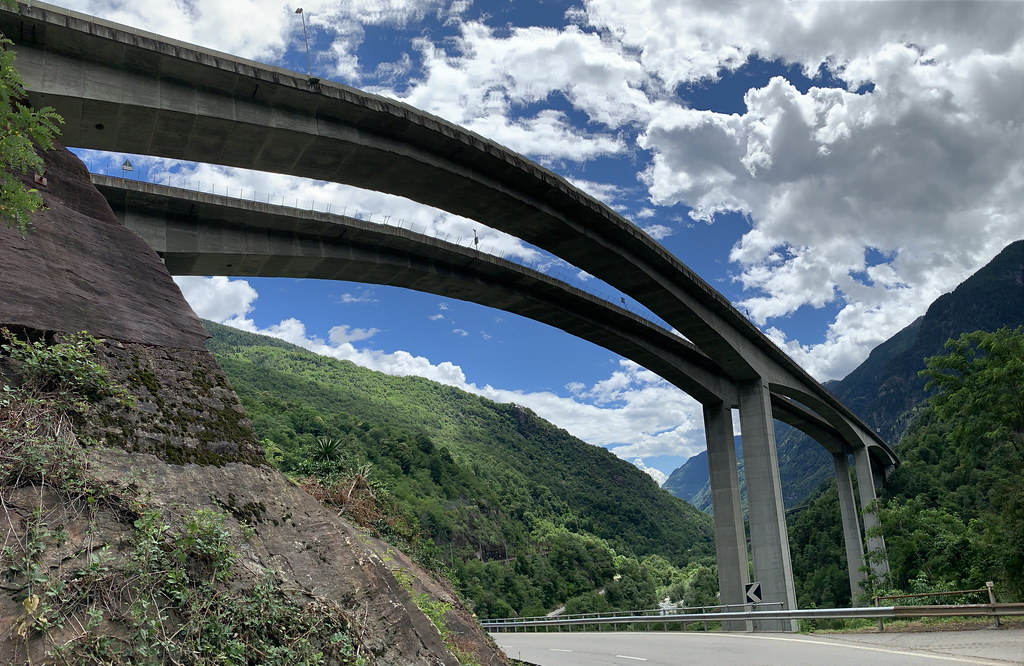 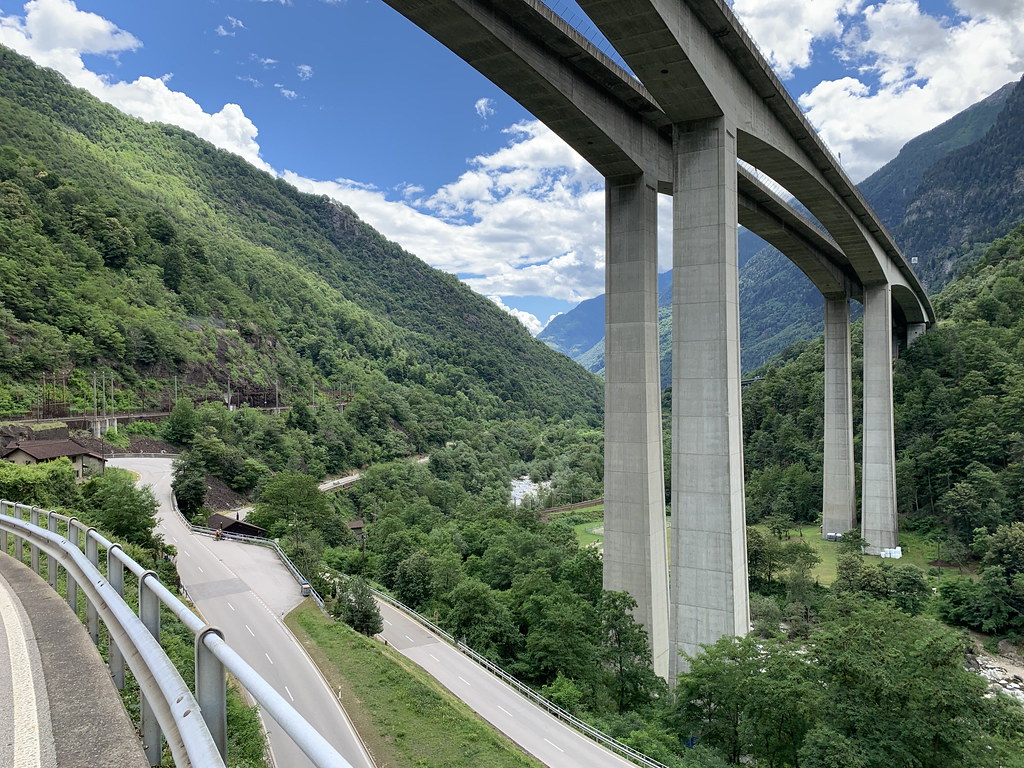 Before that, on the same TV program there is a documentary about the Swissmetro project made in 1998: https://en.wikipedia.org/wiki/Swissmetro

(I don't know if it is visible outside Switzerland, it should be, as they are in-house productions of the state television and not material rented from private companies)
für Güter die Bahn
pour vos marchandises le rail
chi dice merci dice ferrovia
Omhoog

A partial "fourth tube" will be driven first, 4,1 km from the north and 4.9 km from the south. These two tunnels will be bored by TBMs and will be around 7 m in diameter, once the TBMs end boring they will be dismantled and, at the end of these two stub tunnels, workers will start boring a section of the road tube by drill&blast. The two main TBMs will then pass through these pre-bored caverns. I am not so into tunneling technology, but see that as a sort of waste, as these 9 km of tube will be basically useless once the second tube opens. Maybe they could have built all the second tube by drill&blast. Or they could have bored this fourth tube on the full lenght and use it as a second service tunnel, or for a electric power line, or for whatever other use.
für Güter die Bahn
pour vos marchandises le rail
chi dice merci dice ferrovia
Omhoog


Coccodrillo schreef: ↑ma 15 feb 2021, 9:39 Before that, on the same TV program there is a documentary about the Swissmetro project made in 1998: https://en.wikipedia.org/wiki/Swissmetro


Coccodrillo schreef: ↑ma 15 feb 2021, 9:39 (I don't know if it is visible outside Switzerland, it should be, as they are in-house productions of the state television and not material rented from private companies)

MotelMioveni, hai trovato l'URL corretto, vedo adesso che l'URL che ho messo io è quello generico del programma. Sei bravo a scrivere in italiano, io riesco solo a leggere un po' di parole in olandese*. MotelMioveni has found the correct URL, the one I gave is the generic one of the TV emisssion (which is a collection of old documentaries made by SRG SSR). You are very good at writing in italian, I can just understand some words in Dutch and what a text is speaking about thanks to Dutch's similarities with German.

*in Italian your country is quite often called "Paesi Bassi", which is a quite direct translation of "Nederland". But like in many languages "Olanda" is more often used. And the adjective "olandese" is almost always used rather than "nederlandese".

Two tunnels of 4,1 and 4,9 km each and ~7 m in diameter will be bored from each side, then the main road tunnel will be bored, using two TBMs from the two end points and by explosives starting from the end of the two auxiliary tunnels. Tha main TBMs wil thus pass through the two difficult sections which will have been bored in advance thanks to the auxiliary tunnel.

In the end there will be 3 and a half tubes, which are, from west to east:
*southbound road tunnel, the only one in use today with bidirectional traffic
*first service tunnel, which was initially planned to be enlarged to a road tunnel but will remain as a service tunnel as it is now (with the exception of the last metres near its portals, which will be relocated nearby, so the eastern half of the southern portal will no more lead to the servcie tunnel, but to the new road tunnel)
*northbound road tunnel
*second service tunnel, which will be bored in two parts for a total of around 9 km (that's why I said that there will be "3 and a half tubes"), the central section of this tube will not be bored

If a TBM is specifically designed with that option in mind, yes, it is possible to increase its diametre to bore tunnels of different sizes (although usually the difference is a metre at most, I am not aware of any TBMs that can be enlarged from 7 to 11 m, but this doesn't mean it doesn't exist). But it will not be the case there, the 4 TBMs will bore 4 different sections.

There exist also TBMs specifically designed to enlarge existing tunnels, but they are very rarely used. This because tunnels aren't just a hole in the rock, but complex structures with lining (which itself can be made of concrete, steel, and other materials hard to destroy), cables, and so on, so it is often easier to build a new tunnel rather than enlarge an existing one (like in the Gotthard's case) and, if it is really necessary to enlarge an existing tunnel, it is almost always better to enlarge it with explosives or other methods.

A more common tunneling method is boring a small tunnel with a small diametre TBM, and then enlarge it with explosives. This has been done in the Roveredo GR/San Fedele tunnel on A13, where a ~5 m TBM has been used to drill firstly an exploratory tunnel, then the service tunnel. When that TBM finished its work, explosives were used to enlarge the exploratory tunnel to full width and to link it with the service tunnel.
für Güter die Bahn
pour vos marchandises le rail
chi dice merci dice ferrovia
Omhoog 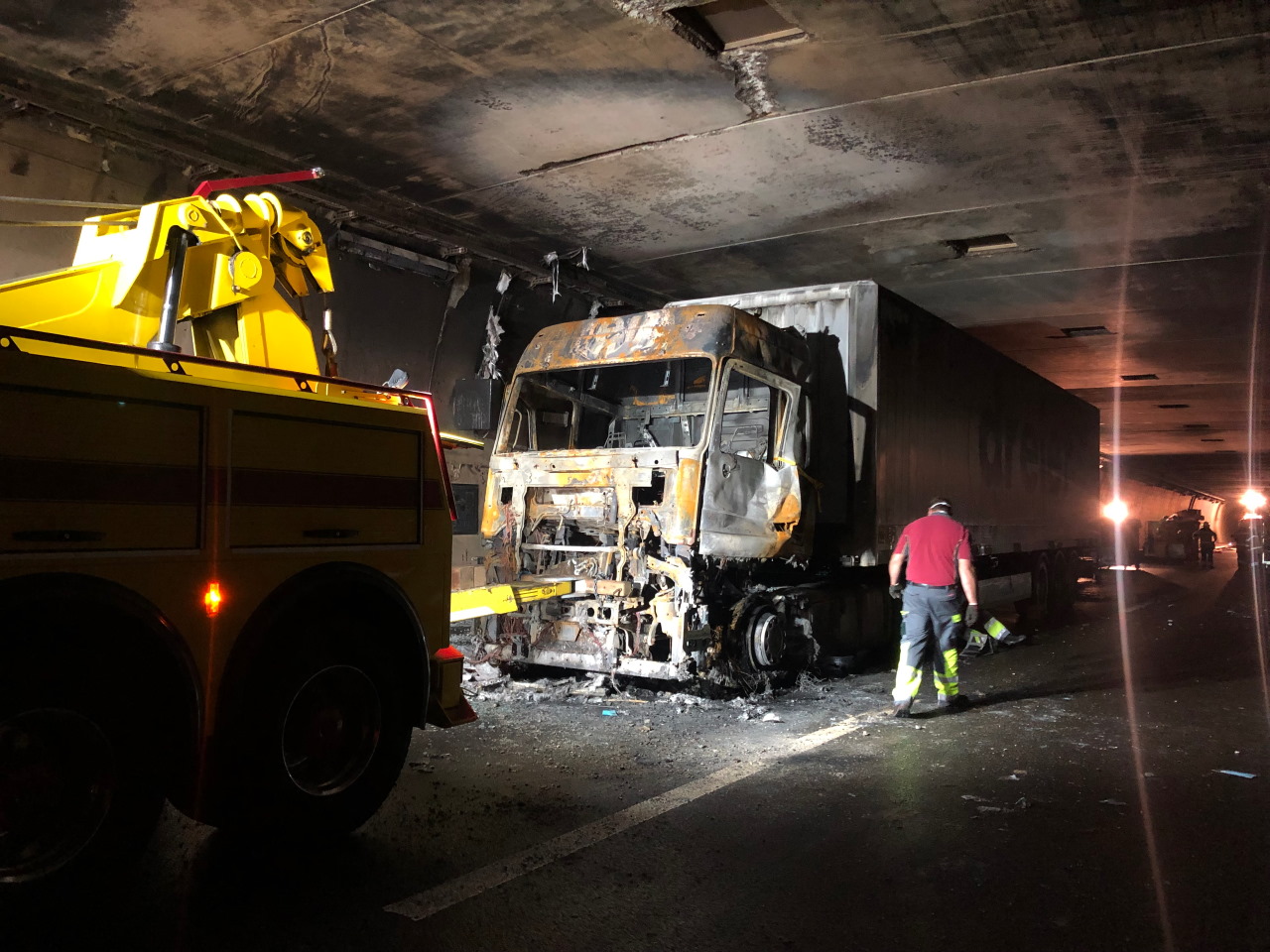 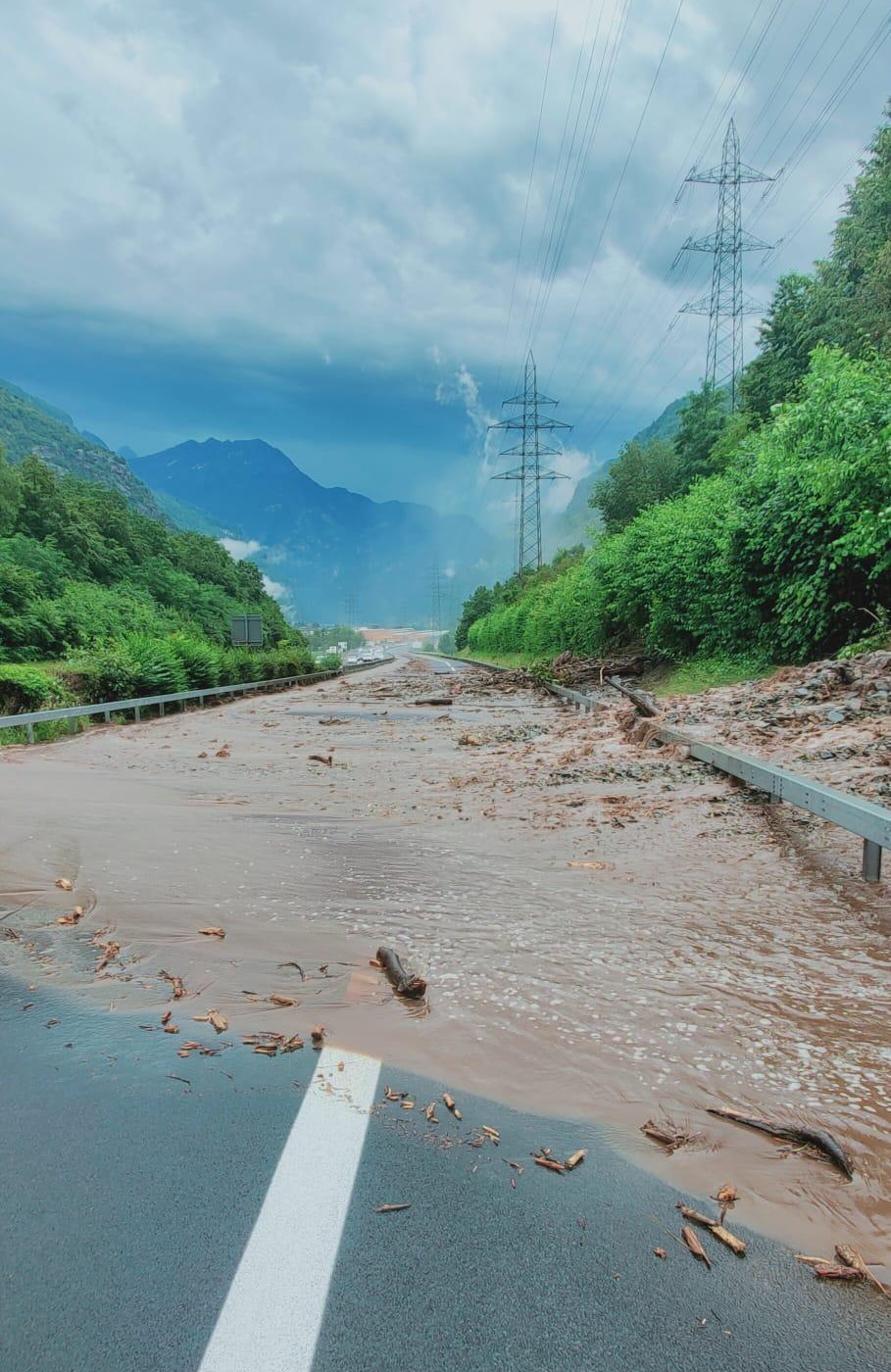 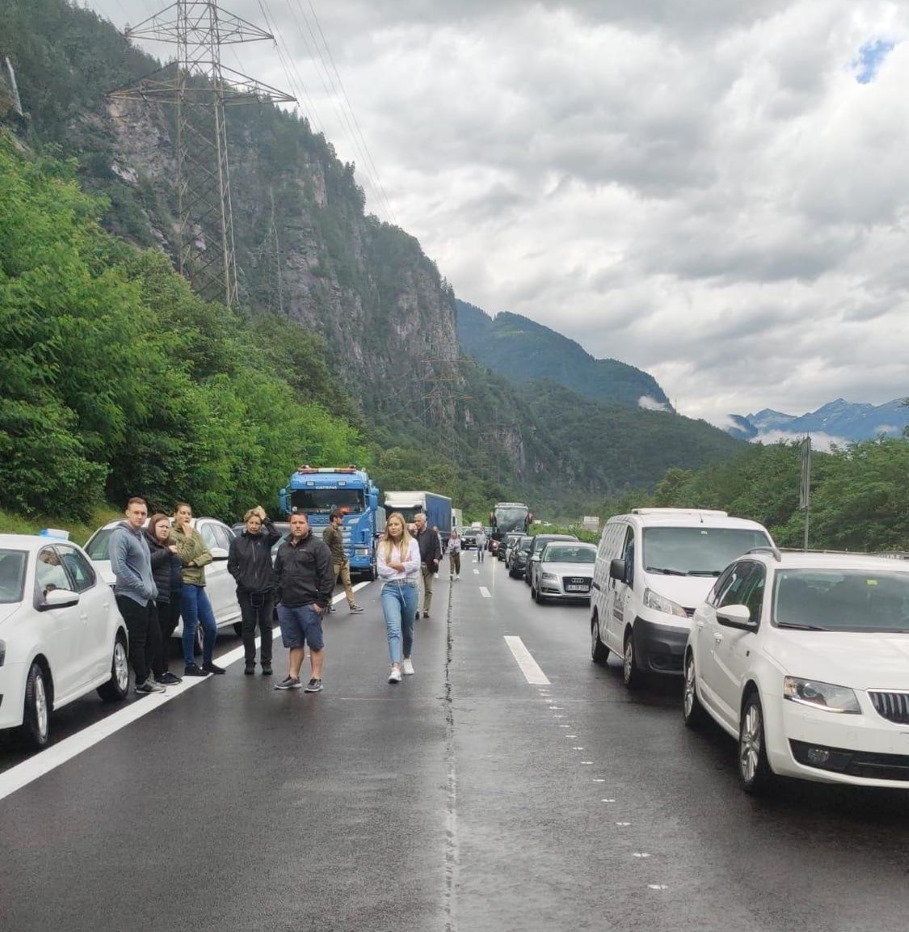 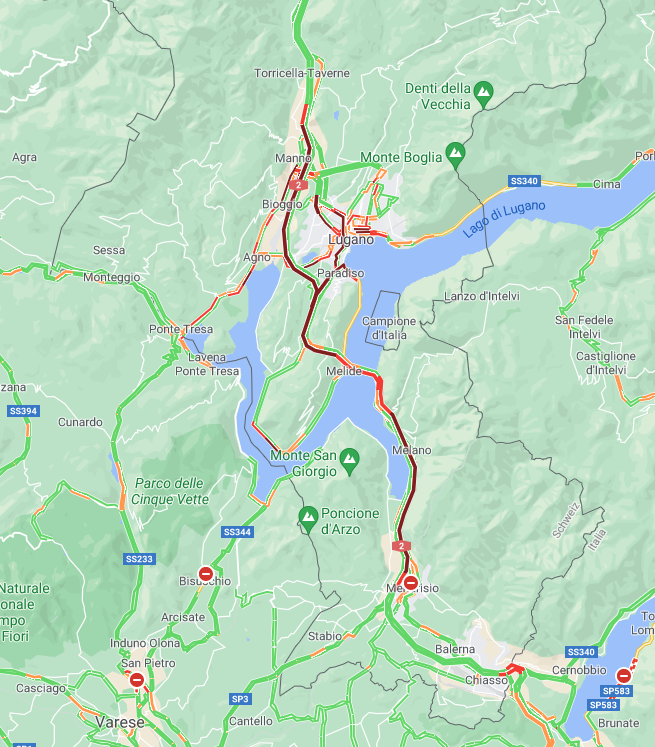 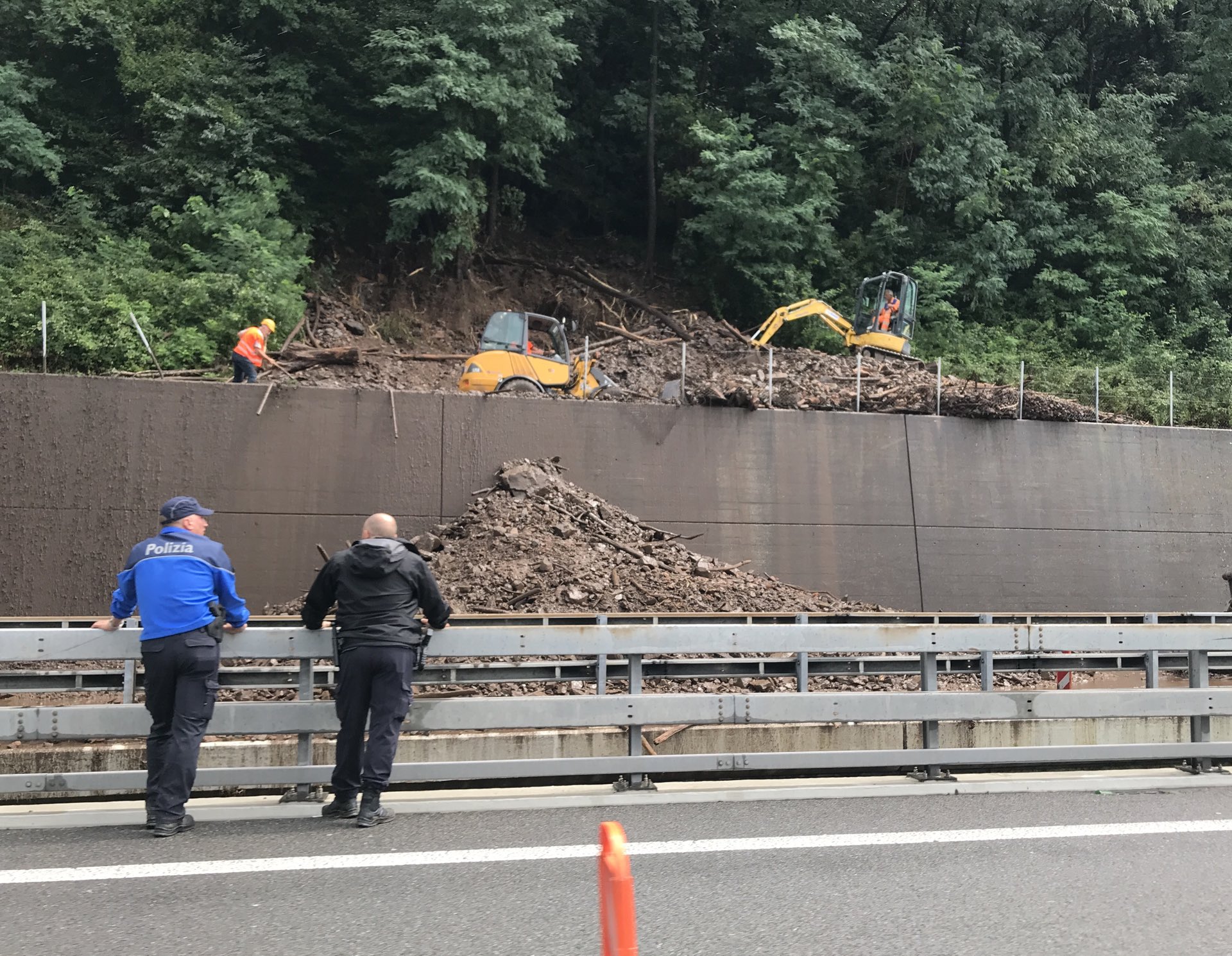 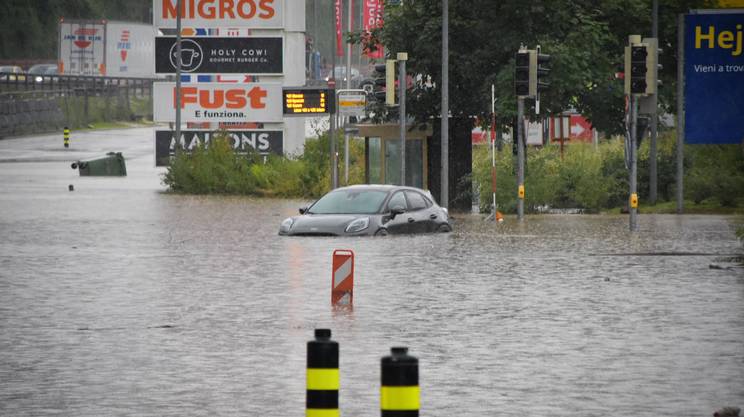 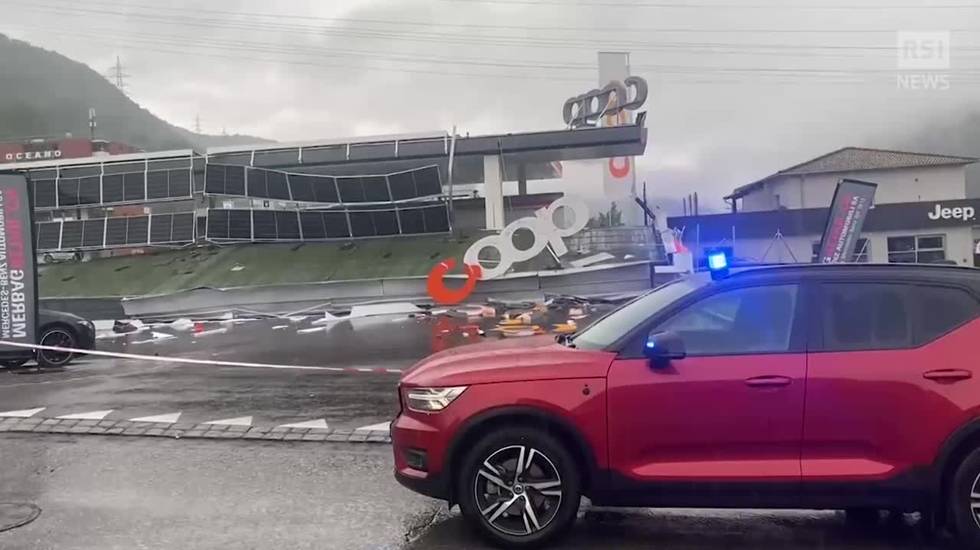 The roof of this gas station has been built only a few months ago, so the collapse it is likely due to a design fault, not due to the weather. Luckily there were no injuries, the drivers of the two cars under it were both inside the shop to pay for the fuel.

A2 northbound near Bissone (just before the lake crossing) has been reduced to one lane again a few hours ago, I suppose in the same spot of the small landslide of the other day.

I never read that (I thought it was Bergen in Norway), and I don't feel it is true, however this moring it was really sunny and now it is raining, and during the night there should be quite a strong rain. Weather in Ticino can change a lot. Mountains around Bellinzona can be seen covered by snow up in June, and it can be very hot soon after. The highest temperature ever recorded in Switzerland was around 42 °C in Grono (Grigioni/Graubünden, but near Bellinzona).
für Güter die Bahn
pour vos marchandises le rail
chi dice merci dice ferrovia
Omhoog 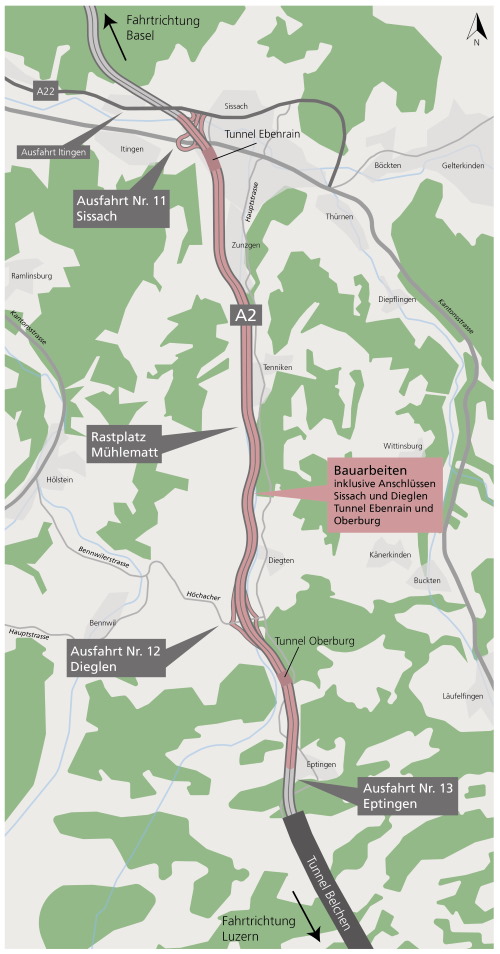 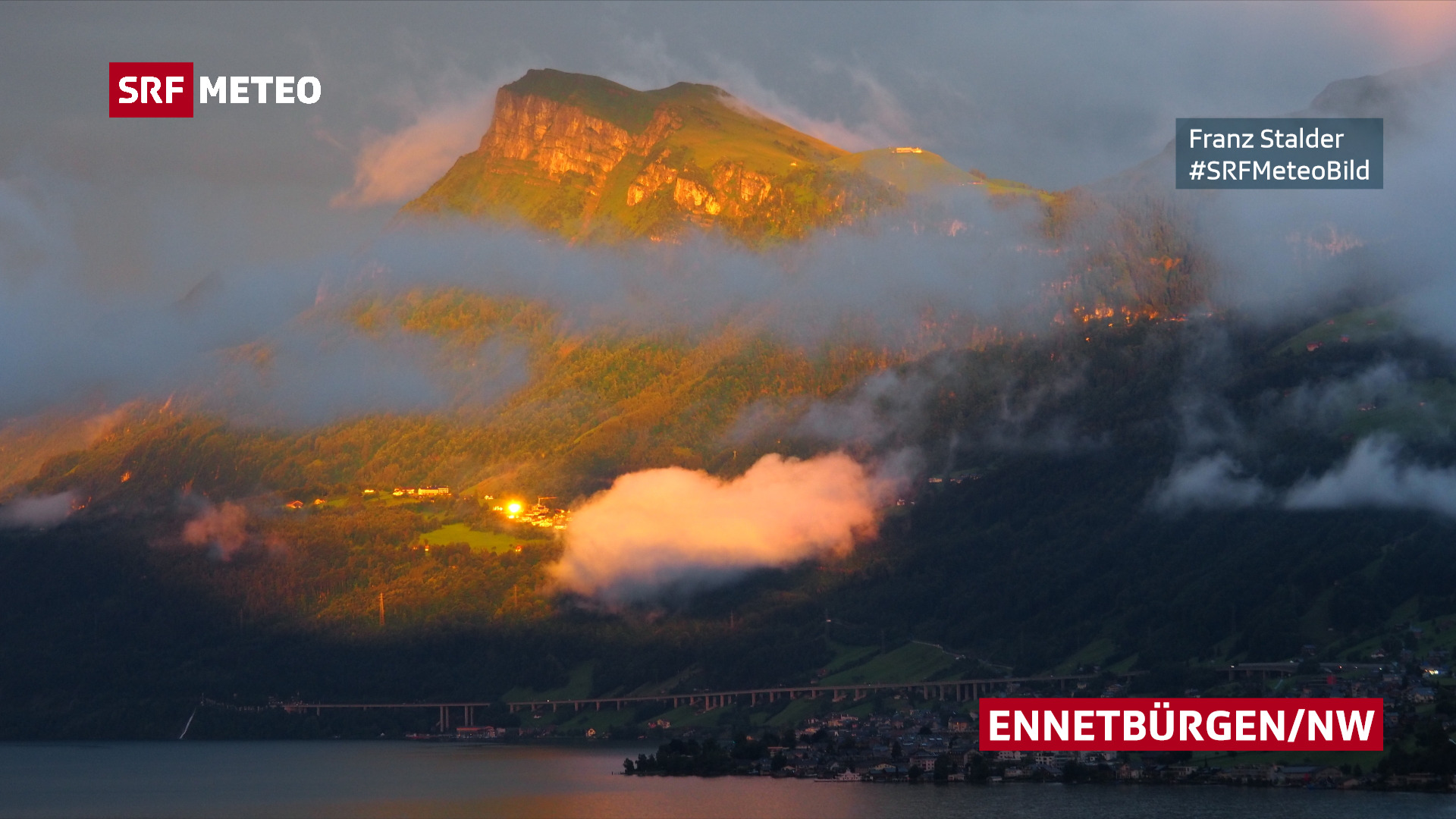 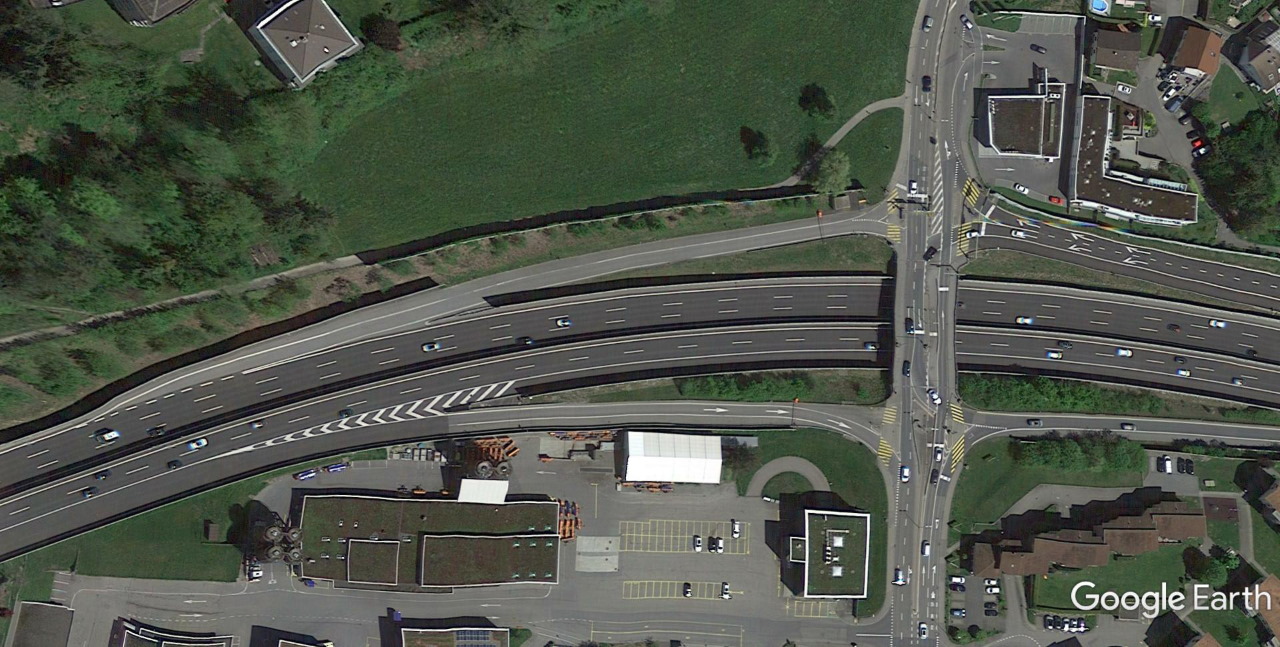